In my previous post I took a somewhat critical look at artistic ‘greatness’ understood as a quality that sharply distinguishes ‘great’ artists and their works from ‘ordinary’ people and everyday life. For art to move us, does it necessarily have to rise above us? Does it have to be a work of incomparable genius? Does it have to be monumental? Or can it be small, banal, personal? Can it, quite simply, speak about love? I will now be looking at pictures by an artist who filtered his personal experiences through some of the most trivial and commonplace products of the visual culture of his time, transforming those trivial images into something intimate and full of life. This perpetual oscillation between general and singular, public and personal, was crucial to Bertalan Székely’s (1835-1910) representations of domestic life.

The collision between greatness and intimacy is a productive force in Székely’s oeuvre. Today, he is widely known as a history painter: his scenes from 16th-century battles against the Turks are familiar to the Hungarian viewer not only as artworks, but as illustrations in history books. They are certainly great: depicting turning points in history, they are monumental in their sizes and awe-inspiring in their compositions, often recalling religious imagery, as in the case of The Discovery of the Corpse of King Louis II after the Battle of Mohács. There is, however, another facet to Székely’s art, much less known today, but – as evidenced by his notes and sketches – considered equally important by the artist himself. Besides the great events and heroes of Hungarian history, Székely also aimed to depict moments of everyday life; scenes so general, so universal that – according to him – any person from any country would understand them. To achieve this, he planned series of lithographs narrating ‘typical’ human lives. 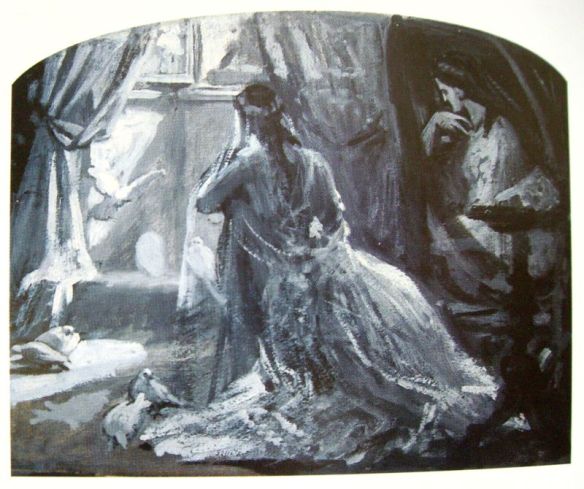 Bertalan Székely: The Bride, 1869-1870 (oil sketch for a scene from the series Life of the Woman; Hungarian National Gallery)

END_OF_DOCUMENT_TOKEN_TO_BE_REPLACED

The retrospective exhibition of Károly Ferenczy (1862-1917), one of the most well-known Hungarian painters, opened at the Hungarian National Gallery last December and is on view until 17 June. Ferenczy’s importance in the history of Hungarian art has hardly been contested in the nearly 100 years that have passed since his death, but the exhibition still manages to show him in a new light. Previously, the painter was mostly seen as one of the founding fathers of the Nagybánya (today Baia Mare, Romania) artists’ colony – an independent school whose members are often (quite imprecisely) dubbed ‘Hungarian Impressionists’. Hence, Ferenczy was known to the public as an Impressionist or plein-airist, as a painter of sunny landscapes. The current exhibition (curated by Judit Boros and Edit Plesznivy) presents the many facets of his oeuvre as equally important, giving due space to his portraits, nudes, and Biblical scenes, which had formerly been decried as examples of the ageing painter’s ‘new academism’. This shift of emphasis leads to surprising results. Maybe painting the effects of light wasn’t the central concern of Ferenczy’s art after all. Maybe he was preoccupied with something else – with the human body, with sensuality and desire, and with the representation of unattainable ideal beauty. END_OF_DOCUMENT_TOKEN_TO_BE_REPLACED