The retrospective exhibition of Károly Ferenczy (1862-1917), one of the most well-known Hungarian painters, opened at the Hungarian National Gallery last December and is on view until 17 June. Ferenczy’s importance in the history of Hungarian art has hardly been contested in the nearly 100 years that have passed since his death, but the exhibition still manages to show him in a new light. Previously, the painter was mostly seen as one of the founding fathers of the Nagybánya (today Baia Mare, Romania) artists’ colony – an independent school whose members are often (quite imprecisely) dubbed ‘Hungarian Impressionists’. Hence, Ferenczy was known to the public as an Impressionist or plein-airist, as a painter of sunny landscapes. The current exhibition (curated by Judit Boros and Edit Plesznivy) presents the many facets of his oeuvre as equally important, giving due space to his portraits, nudes, and Biblical scenes, which had formerly been decried as examples of the ageing painter’s ‘new academism’. This shift of emphasis leads to surprising results. Maybe painting the effects of light wasn’t the central concern of Ferenczy’s art after all. Maybe he was preoccupied with something else – with the human body, with sensuality and desire, and with the representation of unattainable ideal beauty.

Consider a painting like Ferenczy’s Orpheus (1894). A mythological figure positioned in the woods, it was formerly seen as an example of the painter’s early Art Nouveau/Symbolist period, which, in turn, was characterised as a kind of prelude to Ferenczy’s ‘mature’ plein-air period. The significance of the subject (according to Ovid’s Metamorphoses, after losing Eurydice for the second time, Orpheus only found consolation in the love of young men) and the unmistakable sensuality of the male body did not ring any alarm bells; the traditional interpretation, as well as Ferenczy’s image as impeccable family man was much stronger. (Only to Hungarian art historians, it seems. A quick Google search for “Károly Ferenczy” and “homosexual” brings up several sites dedicated to homosexuality and art featuring his paintings, most often his Orpheus.)

In the course of preparing the present exhibition, something changed, and – beautifully – that change was brought about not by speculation, but by the most rigorous, old-fashioned art historical research. Apart from the lavishly illustrated scholarly catalogue, the Gallery also ventured to publish a collection of Ferenczy’s annotated letters. Carefully reading through these documents while editing them, one of the curators, Judit Boros discovered an unknown aspect of Ferenczy’s personality; one in which private life and artistic credo become so closely intertwined that untangling them is virtually impossible. The sources show Ferenczy as a devotee of homoerotic male beauty and – on a less personal level – as an artist influenced not so much by Impressionism as by British Aestheticism. Evidence suggests he knew the philosophy of the Oxford Uranians, who regarded the youthful male body as the incorporation of the ideal and an object of eternal yearning.

The sources are not easily read, because what they conceal is sometimes even more important than what they reveal. For one thing, many of the letters only survive in a fragmented form, because their addressee, Ferenczy’s elder son Valér cut out the parts he considered unfit for future readers. On the other hand, the letters the painter addressed to his younger son, Béni, survive intact. It is in the latter that we can find references to the circle of the Uranians (for example, in Ferenczy’s usage of the word ‘oxonian’ when describing artworks depicting male nudes) and to male beauty as an ideal (in the sensual, detailed description of the body of the dancer Vaslav Nijinsky). The fact that there are no such references in the letters written to Valér seems to indicate that these were the exact parts that were destroyed by the older son. (All of Ferenczy’s children became artists – Valér was a painter, Béni a sculptor, while Béni’s twin sister, Noémi made tapestries. It would have been only natural to discuss artistic questions with all of them. The homoerotic tendencies were sublimated into artistic questions in the letters – thus, their absence from those addressed to Valér is quite poignant.) Valér published a biography of his father in 1934, constructing the image of the family man and the naturalist painter – as if the two were inseparable. He omitted not only Ferenczy’s personal (and still hypothetical) queerness, but also the artistic sources of inspiration related to it. The essay published by Judit Boros in the exhibition catalogue* argues convincingly that there is ample circumstantial evidence to prove Ferenczy had read Aestheticists like Walter Pater and John Addington Symonds, and that he was strongly influenced by them – and yet, these authors are not even mentioned once in Valér’s account.

According to Valér, Károly Ferenczy had decided to become a painter because he was influenced by his future wife Olga Fialka, a painter herself. This story again seems to be a construction devised to conceal the role of Aestheticism in Ferenczy’s artistic formation, substituting it for heterosexual love. In 1880-1881 – before meeting Olga – Ferenczy had frequented a series of lectures on the Renaissance given by the art historian Károly Pulszky at the university in Budapest. Incidentally, Pulszky was translating John Addington Symonds’ series of books on the Italian Renaissance at that time – making it unlikely that he had not mentioned it in his lectures. It can be no coincidence that Ferenczy decided to visit Italy in 1884, as soon as his father had finally approved of his decision to become a painter. The Renaissance inspiration did not manifest itself immediately in his work, but when it did, it was unmistakably a Victorian, Aestheticist Renaissance (see for example: Adoration of the Magi, 1895, Hungarian National Gallery).

In terms of written sources, Ferenczy’s homoerotic Aestheticism can only be reconstructed from such fragmented evidence. The main appeal of Judit Boros’ theory is, however, that it is also supported by the paintings; in fact, it seems to provide an unprecedentedly universal key to the interpretation of the oeuvre. Orpheus can be seen as a counterpart to one of the artist’s most well-known works, Birdsong: the homosexual male is juxtaposed with the pregnant, heterosexual female; loneliness and isolation with fecundity; art with nature. In The Prodigal Son, the youth is ashamed and humiliated in his nakedness, left to the mercy of the father figure – representing at once the subject of longing and the shame that longing must have caused the painter, who had to suppress his desires in order to conform to society. A strange group of paintings, Ferenczy’s depictions of acrobats and wrestlers – painted so much more sensually than his female nudes – can also be interpreted as conveyors of his homoerotic Aestheticism.

I mentioned suppressed desires, but it has to be stressed that the sources give us no explicit information on Ferenczy’s personal feelings, let alone on whether he ever had any homosexual relationships. In the Hungary of the late 19th and early 20th century, the subject of homosexuality was barely ever mentioned. Ferenczy was an introvert, not a rebel, and probably chose to abstain from his desires – that was the price he had to pay to fit into society. Understanding that, it is no use to speculate about what he has hidden from us forever; it is, however, possible to bring to light what he chose to reveal. We have no idea of his personal life, but he gave us ample clues to decipher his artistic identity. Ferenczy – just like the Uranians – equated homoerotic desire with the longing for aesthetic perfection. The reconciliation of the abstract aesthetic ideal with sensual beauty became a central concern of his art. He returned to this problem throughout his career, not just in his depictions of male nudes, but also in various other types of pictures, including those traditional-looking female nudes which were formerly considered blatant examples of his ‘new academism’. One of these paintings was obviously inspired by Velázquez’ Rokeby Venus – except for the fact that instead of looking at her reflection in the mirror, the nude model is gazing at herself sitting in the background in a different pose. The absurdity of this situation draws attention to the tension between real and ideal. The woman must be real, because we can see her in more than one pose – she is not just a two-dimensional paraphrase of a classical painting. On the other hand, she cannot be real – because, obviously, in that case she would not be able to be in two places at once.

More importantly, the picture alludes to homoerotic desire, which was often perceived as narcissistic.The model is immersed in her own beauty, and the beholder of the painting can only gaze at her from outside. It would be possible to cite many more examples. Ferenczy’s oeuvre is extremely rich and varied, and his homoerotic aestheticism manifested itself in many ways. He approached the subject from multiple angles, thematising narcissism, shame, defencelessness, desire, isolation, and platonic love. Maybe Ferenczy, the married man, has overshadowed the queer Ferenczy forever, but we art historians are able to free Ferenczy, the adherent of the Aesthetic Movement, from the shadows of Ferenczy, the naturalist. His personal coming out was made impossible by the age in which he lived, but his belated artistic coming out can finally begin. The doors are open. 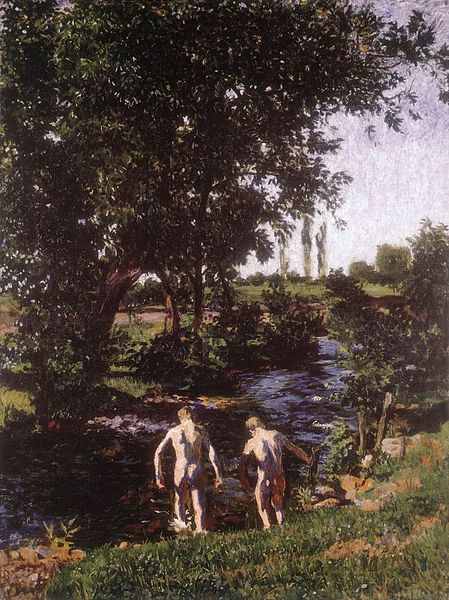